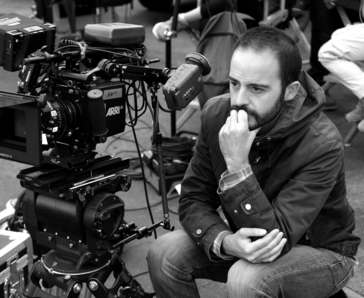 Alvaro Martin Blanco (Bilbao 1978) studied at the Faculty of Fine Arts at the University of the Basque Country. While attending the program, Blanco studied painting, sculpture and photography in addition to working on short film projects.

In 2002 he graduated from the University with honours – his final project was directing of the short film “Paisaje desde una ventana.” For this film, he collaborated with the Bilbao Arte Foundation.

During the years to follow he lived in England, Ireland and Italy; where he worked in a variety of artistic fields, focusing on his photography.

In 2005 he ran a Photography Seminar at the Centro Sperimentale di Cinematografia di CineCitta in Rome, whose course tutor was the cinematographer Giuseppe Rotunno.
In 2006 he was accepted at the ECAM (Film School of Madrid – Spain) in with a focus on Photography; he also received a grant for Artistic Studies Widening.

During the next three years, he alternated his studies in ECAM with several media productions. Meanwhile, he went on with his career as a photographer and presented both individual and collective photography exhibitions such as “Eskerraldea” or “On the Road”.

In 2009 he obtained a diploma at the ECAM and was nominated as Best Cinematographer in the Kodak film School Competition in Clermont Ferrand for the project “Estolcomo” (35mm).

Additionally, in the 2009 year, he designed the theatre lighting for the play “Good Sex, Good day” as well as an adaptation of “La Casa de Bernarda Alba” by Federico García Lorca.

The following years he worked as the Director of Photography for multiple projects, all of which were critically acclaimed at a number of international festivals. His projects have been screened at such prestigious festivals as Cannes, Seattle, Clermont Ferrand or San Sebastian.

In 2013 he moved to Los Angeles, where he continues his career as Director of Photography internationally, developing advertising, fiction, television content and virtual reality projects.

He has worked in commercials for brands such as Arena, Gillette, Honda, Ford, Crest 3D, Sabritas-Lays, Lakers, Real Madrid, Gerber, Red Cross, Disney, among others.
In TV Alvaro has developed content for HBO, Amazon Prime, El ReyTv Network channel, founded and directed by Robert Rodriguez, and Time Warner Cable TV, among others.